Perhaps one of the strongest reasons for choosing Saint Vincent and the Grenadines as a tax haven in which to base your offshore company is the Preservation of Confidential Relationships (International Finance) Act 1996. Designed to address the privacy trepidations of those setting up an IBC in St. Vincent and the Grenadines, this important piece of legislation stipulates the most stringent confidentiality law on the planet today.

Also referred to as St. Vincent or SVG, this small but mighty sovereign nation is one of only three countries in the world with general financial privacy laws, which are aimed at protecting against disclosure of confidential information to any other jurisdiction in the world.  Release of confidential information is strictly prohibited and only permitted in cases where criminal legal action (as determined by laws of both the foreign jurisdiction and St. Vincent) is underway against an offender in another country.

In no way are disclosures allowed simply due to infringements of a jurisdiction’s tax code or revenue regulations. A former British Crown Colony, which gained its independence in 1979 and has enjoyed political stability since that time, St. Vincent is a parliamentary democracy with laws based on English common law. The language of government, commerce, as well as its principal spoken language is English.

St Vincent has a strong banking system that allows for non-residents to open an offshore bank account with minimal hassle, no in-person requirements, low fees all in multiple currencies. St. Vincent has an open economy. The government has been successfully working toward diversifying an economy that at one time was overly dependent on the fruit exports.

In recent years, tourism has become a bright spot in the island’s economy and has now overtaken agricultural exports as the leading source of foreign exchange. St. Vincent is an active member in a number of international organizations including the World Trade Organization, the International Monetary Fund, and the World Bank, as well as being a member of several regional organizations.

The country has strong economic ties with the United States, Canada, China, members of the European Community and other countries in the Eastern Caribbean. For those seeking a sovereign overseas jurisdiction offering the strictest secrecy and confidentiality advantages over other countries, St. Vincent may be just the right place. 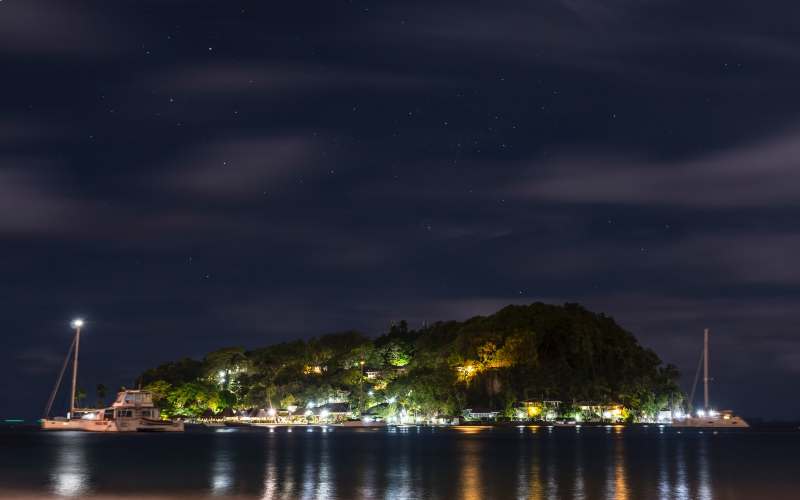 Benefits of St. Vincent & the Grenadines as a Tax Haven

In-Depth Information about St. Vincent & the Grenadines as a Tax Haven

St. Vincent and the Grenadines (SVC) is a multi-island country. St. Vincent is the largest of the islands and is home to most of the population. St. Vincent has an area of 133 square miles and it is relatively densely populated. The other islands and islets that make up the country are much smaller. The capital and main port is Kingstown, which is located near the southern tip of St Vincent.

SVG is a part of the Windward Island chain that defines the eastern boundary of the Caribbean Sea and is located at the southern end of the chain. The nearest neighbors are St. Lucia, which lies 21 miles to the north and Grenada, which lies 28 miles to the south, at the southern extremity of the Grenadines. The island nation of Barbados lies 100 miles to the east. The nearest large land mass, not far to the south of Grenada, is the South American nation of Venezuela. Puerto Rico lies 2 1/2 hours of flight time to the north.

If you are looking for a patch of level ground, you may have to look long and hard for one on the island of St. Vincent, as it is very mountainous. The island is largely covered by tropical rainforest. Rocky cliffs characterize the windward side, while the leeward side features bays and sandy beaches.

An active volcano located on the northern part of the island, La Soufriere, last erupted in 1902, causing significant damage. St. Vincent and most of the Grenadines lie within the hurricane belt. The last hurricane to cause significant damage occurred in 1999. SVG is administratively divided into six parishes: Saint Patrick, Saint George, Saint Andrew, Saint David, Charlotte, and Grenadines.

French settlers from nearby Martinique established a colony in 1719. The Treaty of Paris ceded St. Vincent to Great Britain in 1763, but it was not until over a hundred years later in 1877 that it became a Crown Colony within the British Commonwealth. St. Vincent achieved associate statehood in 1969, which gave the population control over internal affairs. Full independence was granted in 1979.

St. Vincent is a parliamentary democracy as well as being a constitutional monarchy. Queen Elisabeth is the head of state. The Governor General, whom she appoints, represents the Queen. The office of the Governor General is largely a ceremonial one as most governmental duties are performed under the auspices of the prime minister.

There are several political parties in the country, the two largest and most influential being the New Democratic Party and the Unity Labor Party. St. Vincent has not known political violence of strife in recent history.

The judicial branch is composed of the Eastern Caribbean Supreme Court and a court of appeals, the St. Vincent and Grenadines Supreme Court. The court of last resort is Her Majesty's Privy Council in London.

The economy of SVG has long been dependent on agriculture and overly dependent on a single crop – bananas. The government has, in recent years, devoted a great deal of attention to diversifying the economy, and with a measure of success although bananas still account for nearly a third of the exports. Other exports of significance are taro, arrowroot starch, and tennis racquets.

The three largest sectors in the economy are services, which account for 57 percent, agriculture at 26 percent, and industry at 17 percent. The financial sector, including the offshore financial sector, is still a relatively small part of the economy, but nevertheless plays a prominent role and is growing. The first indigenous St. Vincent bank was established in 1907. The number of banks in St. Vincent and the Grenadines now numbers six. St. Vincent’s entry into the international financial services sector dates back to 1976, with Swiss lawyers providing the guidance.

Tourism is presently a bright spot in the overall economy. Tourism is actively promoted, with a tropical climate, rainforests, and sandy beaches being the principal draws. Cruise ship berths came on line in 1996. In 1993, tourism supplanted the sales of bananas as the number one source of foreign exchange.

St. Vincent also benefits from being a member of the Caribbean Basin Initiative and belongs to CARICOM, the Caribbean Community that works in partnership with the U.S. to promote investment and trade in the area.

With respect to infrastructure, the country has a SOA fiber optic digital telephone system, the Internet, and cellular service together with a TV station, cable, and several radio stations. Kingstown has a natural deep-water harbor capable of accommodating ocean-going ships. There is regular maritime service between the Kingstown port and ports in North American, Europe, and elsewhere in the Caribbean. The merchant marine consists of over 400 ships, approximately three-quarters of which are foreign-owned. 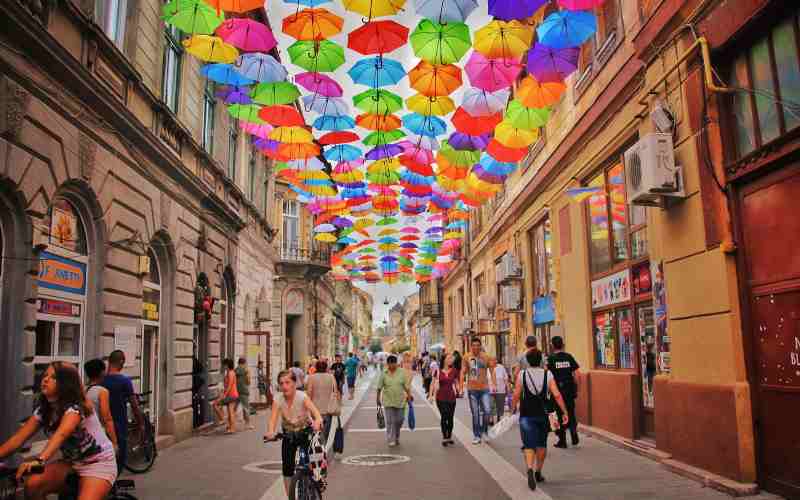 If you are a resident of St. Vincent and the Grenadines, you will call yourself a Saint Vincentian, or simply a Vincentian. The first inhabitants of these islands were Caribs. People of African descent who either had escaped from slavery or were shipwrecked later joined them. These people were known as Black Caribs. Though the majority of those on St. Vincent who are of European descent are Portuguese, the islands were first colonized by the French and later by the English.

The main language spoken is English. English is also the official language of St. Vincent and is the language of commerce. A second language, Vincentian Creole, is spoken mostly in the homes and among friends.

St. Vincent is a sports-loving nation. Football (soccer) is extremely popular, as is rugby. Other sports having significant followings are track and field, tennis, and netball – the latter being exclusively a woman’s sport. Yachting is popular, but most organized yachting activities take place at various locations in the Grenadines, where a number of upscale resorts are located. The Grenadines are considered by some to be a mostly a playground for the rich and famous.

The favorite music of Vincentians has a definite Caribbean flavor. Residents like to listen to or perform big drum music, reggae, steep pan, and calypso.

Saint Vincentians have a literacy rate of 96 percent and approximately 70 percent of the population use the Internet.

Like other members of the Organization of Eastern Caribbean States, SVG does not have exchange controls on transactions under US$100,000.

St. Vincent and Grenadines law is derived from English common law and statutes. The country has its own body of statutory laws, including laws covering the international finance sector. It has implemented a number of laws and regulations with respect to taxation and the exchange or information for tax purposes with a number of other jurisdictions, including Canada, the UK, and several members of the European Union.

St. Vincent is also a party to the CARICOM treaty and has committed to cooperate with the Organization of Economic Cooperation and Development (OECD) to implement laws that ensure an efficient and transparent tax information exchange regimen.

The law governing International Business Companies is administered under the auspices of the St. Vincent and Grenadines Financial Services Authority. The St. Vincentian government places Saint Vincent offshore and local investors on an equal footing, as far as laws regarding general business operations are concerned. The government operates in a transparent manner. When disputes arise, the court system operates somewhat slowly, but fairly.

The 114-page IBC Act 2007 document provides everything a potential investor needs to know about establishing an IBC in St. Vincent. The New International Business Companies 2008 Specific Regulations spell out in detail the rules to be followed to comply with the Act.